Where it all Began - Norco Dairy Farmer Warren Gallagher

The Norco Co-operative celebrates its 122th Birthday on 5th June this year but it was in 1892 that the actual history of Norco began. A group of 40 farmers gathered under a tree at Clunes to discuss how they could pull together to secure a better and more profitable future for the dairy farmers of the Northern Rivers by exercising the principles of collaboration. How appropriate that my story this edition is about a Clunes Dairy Farmer, Warren Gallagher.

The first thing that struck me when I met Warren is his huge, infectious smile and relaxed nature. He is a third generation Norco dairy farmer and to date lives in the family home on the farm that his Grandfather, Jack started; breaking into a broad smile he said “I’ve never actually left home”. Warren’s grandfather, John James Gallagher who was known as Jack purchased the property on 6th March 1907. The name of the property is ‘Moyola’ and with so many property names they are steeped in history. Warren shared with me how the name came about; “Hugh Stewart who was my Great Grandfather was visiting his daughter Elizabeth, my grandmother and looking down on Benny’s Creek he remarked that the view reminded him of the Moyola River in Northern Ireland. Apparently he turned to Elizabeth and said “you must call the farm ‘Moyola’”. The name remains and as you know is known as ‘Moyola’ Illawarra Cattle Stud. The farm-house was in fact built in 1896 the year after the Norco Co-operative commenced the creamery at Byron Bay.

Warren remembers his Dad Hugh and his Uncle Fred working the dairy farm, supplying milk to Norco; he said “I admit to being a little lazy as a kid but I always knew that I would be a dairy farmer, I couldn’t imagine doing anything else with my life”. Warren’s Uncle Fred passed away in 1983 and from 1990 when he left school Warren was working with his Dad in the dairy; the third generation of Gallagher dairying began when Hugh retired in 1999.

Warren, his partner Megan MacKenzie and their two Children, Reece 11 and Caitlin 9 and of course Zeus their Blue/Red X Cattle dog live on what must be one of the most beautiful hills in, ‘The Northern Rivers’. The 286 acres of lush green pastures and rolling hills; 220 being usable paddocks and 140 acres irrigated from Benny’s creek are scattered with mainly Illawarra cattle. Commanding an almost 360deg view from the top, it’s no wonder that Warren doesn’t feel the need to move too far from home. The fact that he runs the dairy for the most part on his own, milking approx 180 head, twice a day plus maintaining the farm is another reason he spends much of his time ‘On Top of the World’ at Moyola.

Warren appreciates whatever time his Dad gives him on the farm whether it is at milking time, spraying paddocks or maintaining fence lines, “Dad runs his own race, he and Mum (Jan) love spending time caravanning around the country side, which is the way it should be” said Warren. Megan handles all the calves and as all good parents, they share the transportation for the after school sports activities that Reece and Caitlin are involved in on a daily basis such as; tennis, cricket, and baseball for Reece and Gymnastics for Caitlin and both are involved in Little Athletics. Reece competes in both Discus and Shot-put and has travelled to the state championships held at the Olympic Park in Sydney, which he will do again this year on 20th March to compete in the Discus.

Warren also handles the business side of the dairy, admitting that there’s no real system other than what’s in his head. “I always have a plan of what I would like to achieve in the day but the obstacle of life sometimes has its own ideas” he said. When I asked if he finds himself doing his bookwork at night, he replied smiling “I’m an Owl not a Fowl so I’m able to update my spreadsheet pretty easily when the sun goes down”. Warren said that he has made quite a bit of capital investment which in turn enables his systems to be made simpler. “All I need to do is find the time to sit on a machine” he said with a broad smile. There are three people who play an integral role in the Moyola dairy who Warren considers invaluable; they are “Col Barnes from the Norco Rural store in Lismore who is an excellent source of knowledge helping me to keep the pastures healthy and productive, Tim Williams my nutritionist who supplies my feed recipe to the Goldmix Mill and my vet Ray Austin from Keen Street Vets who does my monthly health checks and is always on hand with any other issues I may have. With the recent rain I’ve had some hoof problems which I have been able to maintain pretty well with Ray’s help. I make wooden blocks for the cows’ feet; it keeps them up off the ground and gives them the respite needed from the wet ground and I can continue milking”

As mentioned before; Warren doesn’t do the trip into town very often although he speaks to the staff at the Goldmix Feed Mill when ordering his stock feed, so Richie the Goldmix driver is the most personal contact he’s had for quite some time. He’s fortunate that his Dad takes the truck in to pick up anything that is required from the store which he orders by phone; he told me as he laughed heartily “one time I called the mill to order feed and after a great, long chat with Kenny about fishing we said good bye and hung up. As I went off to tackle the next job for day I realised that I hadn’t actually given Kenny my order, so I had to call back again, we both had a good laugh that day. “I went in to the mill late last year and it was terrific to be able to put faces to the names of the people that are a constant source of help and support; they are a great bunch of people! The high quality feed that I get from Goldmix Stock feed using the recipe that Tim supplies has certainly raised the milk production per cow significantly”.

What does the future hold for Moyola? “I feel very fortunate to have been born into my farming family and I’m sure that our children appreciate and honour their heritage and hope one day they have the same passion that I have for running the dairy. Our farm has evolved over the years and as I’m not a big talker, I’ve been happy running the dairy over the past 16 years primarily on my own with a little help from Dad, but this year I plan on a breeding programme to grow the herd to approximately 250/300 head. We have also secured a lease on an additional 200 neighbouring acres which will accommodate the extra head that we’re planning on. We drop the milking back to around 100 head by the end of April so we’ll be planting our annual Rye Grass paddocks on the 1st April to ensure that the cattle will be grazing on lovely rich pasture over the winter months. My plan is to see the heard increase to 220/230 head by the end of the year, at which time I intend to employ a full time person”. Warren looks forward to having someone on hand who shows foresight and has good old common sense to work with him in the future.

Warren is quick to say that he is very happy to be a Norco milk supplier, knowing that he has access to a wide range of resources if needed and a stable farm gate price per litre for his milk. Even though Warren and Megan’s days are busy, coupled with the sports and Gymnastics that Reece and Caitlin are involved in on a competition level they still manage to radiate a calm, warm peace which is a pleasure to be around. As I drove out over Benny’s creek from the beautiful property, I felt that Moyola is as close as it gets to the epitome of ‘heaven on earth’ and it is little wonder that Warren smiles from his heart. 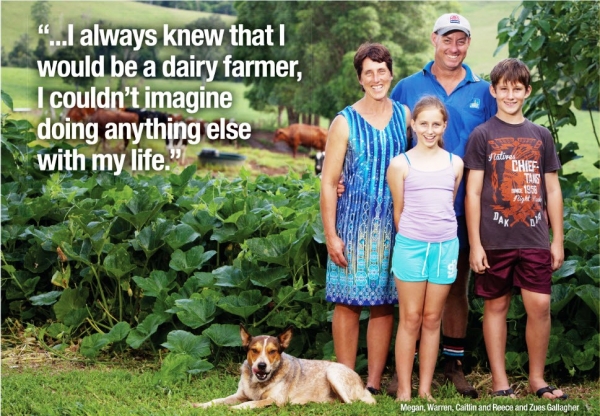