Brothers, Chris and Andrew Mullins are progressive young Norco Dairy suppliers and like many Aussie farmers, they were born into dairying, making them third generation Dairy farmers. Carinya is where they grew up; “we would be in our cots when Mum was doing the daily milking” said Andrew. The property is situated near Allora in Queensland which is known as ‘The Best Little Town on the Darling Downs’; it was previously owned by their parents Tom and Kaye who now run beef cattle, although I believe Kaye is still milking daily for her two sons; ‘Don’t you love Mum’s’ and of course Tom is always available to lend a hand when needed.

Chris and Andrew have a total herd of 450 cows which includes heifers, dry cows and calves, with 250 cows being milked daily. They are both enthusiastic and proactive farmers who have inherited the simple rules of practical farm management but also have the passion to break new ground to enable them to grow and sustain a more self sufficient business. Chris and Andrew utilise the entire ‘Norco infrastructure, which encompasses, The Norco Rural Store, Norco Grain, the Norco Agronomist, their Milk Supply team and the Patronage Scheme.

I asked “what is the major difference in how you are farming, as opposed to how your parents would have farmed”? Andrew explained “We have a more intensive silage feeding regime these days where our parents’ routine was primarily grazing with supplement feed. We feel that it is definitely an advantage to have the control to monitor all aspects of what goes into the feed. Ultimately, if the paddocks’ are clean and producing good quality feed, we are able to produce good quality silage, which is the foundation of our feed.  Although a soybean crop is not something that has been conducive to Queensland weather conditions, it was something that they were keen to explore. “We have had great results with our second soybean crop; the first crop wasn’t successful as it was weather affected but because of the high levels of protein gained from the soybean, we persisted and it is absolutely paying off as it has lowered the usage of protein meals that are added to the daily rations, said Andrew”.

The boys are working closely with Norco Agronomists from the Norco Toowoomba Rural store to assisting them improve the quality of their pastures of Corn, Lucerne, Rye Grass Clover and Soybeans that they grow primarily for silage. Chris said “the soybean crop was definitely not looking good before Norco's Agronomists stepped in with some great advice and now it’s powering” As explained, “optimum production starts on the ground so we are keen to analyse each farm to ascertain what the individual farm wants to achieve and how to work with what is on-hand before having to make unnecessary purchases; that is certainly what we continue to work towards”.

I was shown three different buns of silage; soybean, corn and lucerne & clover which I must say, was very impressive; I haven’t been up close and personal to silage, by any stretch of the imagination; my only previous experience was a pile of smelly rotting mess on the ground covered with plastic; I couldn’t imagine that any animal would want to eat it, not even a really hungry one. When Andrew pulled back the covers of the corn silage and brought out a handful it was really a pleasant surprise; it was a good rich colour and smelt wonderful; I almost felt that I could eat it myself. Now this was feed that I could see the girls getting excited about. All three buns had a slightly different texture and smell but you could tell the crops had been well ensiled. Being ignorant of the whole silage process, Andrew kindly explained how the silage is covered by the plastic and next the silage cover and the last process is to top it all with rows of tyres to hold it down, allowing it to process underneath. The interesting difference to how the Mullins’ brothers cover their silage is that they literally cover the whole bun with tyres, not just a row around the outside and through the middle ... yes, it’s a little more work initially but the end result is a massive drop in wastage. I was told that normally you would expect a minimum 10 cm layer of waste on top, but there was virtually none. The difference was very clear to me after being shown an older bun that had not been covered with tyres; the UV rays had gone through to the silage leaving the top layer dry and unusable and as I said, I don’t know silage but understanding how much you are wasting, directly equates to profitability down the drain   ... that made sense!

Chris and Andrew also have a great working relationship with Neville Brown from Norco Grain  “we purchase our Canola Meal and Soybean Meal which we mix with the silage for our daily rations from Norco Grain. Nev’s a good operator and is always on the ball for whatever we want and when we need it; we know that ‘The Grain Team’ has a handle on what’s happening in the market place and we certainly benefit from their expertise” said Andrew.

Chris and Andrew have plans to upgrade the property and the first project will be new concrete troughs which will be installed in the next few months and they are confident that the new troughs will significantly reduce the wastage of feed that is happening now. The other major project on the horizon is a new shed for the cattle; this one makes so much sense to me because if the cattle are less stressed by the weather, be it heat or rain, and their feed is able to be kept at a moderate temperature it will surely have a positive impact on their production. They would also like to upgrade the dairy down the track. Another cost saving regime they have has come through splitting their milking herd. They feed a top ration to the fresh cows which allows, a cheaper ration to be fed to the staler cows giving them a saving of approximately $3.50 per cow which is a massive saving to the business. They had worked with Jeff Collingwood, the Norco Milk Supply Manager, in making this transition in the ration.

The Mullins brothers have a clear vision and plan of where the future of their business is heading; it’s not about growing the herd to supply more milk; it’s about working with what they currently have while building the infrastructure of the property to enable the business to run more efficiently, resulting in an increase in production and profitability and they are taking advantage of help along the way that Norco offers.

Chris and Andrew are two very progressive and determined young men, who definitely have the concept of’ Working Smarter not Harder’ I have no doubt that they have a very bright and profitable future ahead.

Thank you so much guys for spending the time with me. I have a whole new respect for silage and having now been to the lovely town of Allora, I understand why they call it ‘The Best Little Town on the Darling Downs’, also home for P L Travers, the author of Mary Poppins. 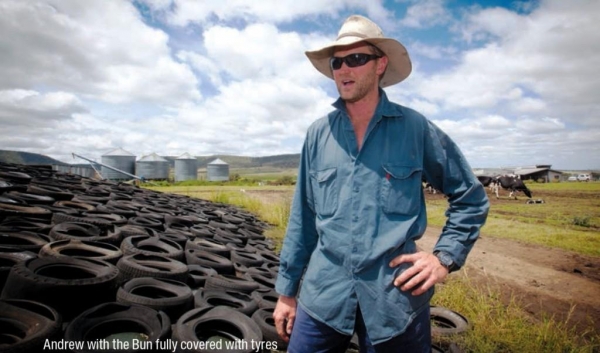