It is the intention of Beef Cattle farmers to make a profit; regardless of the size of their farms and herds.

Bernie Plater, from Kyogle has been farming most of his life, except his stint as an apprentice mechanic, which he hated and then playing rugby league for two years in Sydney which was a great experience for a young man. His father was a banana grower in the Tweed Valley and Bernie followed in his dads footsteps on his own property at Kunghur where he was also growing bananas and cattle farming. Eventually Bernie was happy to leave the banana growing behind as he was suffering badly with back problems.

Bernie and his wife moved to the Kyogle property in 2010 which he improved to Rhodes grass. Since then he has fertilised with NatraMin Cal S, which he purchases from the Norco Rural store @ Kyogle. Today he runs approximately sixty head of healthy cattle on the property; primarily Wagyu cross.

Most Australian land is lacking in essential minerals and Cattle farmers continually need to supplement their cattle to build and maintain body condition. When I asked Bernie what his supplementary regime was he said apart from grain that they have on a daily basis, he has used Anipro for nearly 20 years which he shared how he came about using the supplement. “Terry Moore from Anipro who was @ Primex told me that if I used this product called Anipro, I would definitely see an improvement in the health and condition of my cattle; he also said that I would see an increase in bull calves. I just thought he was full of sales rubbish, but I’d give it a go anyway; he was right! My cattle definitely improved in condition and I did have more bull calves, so I’ve been using it ever since”

Anipro professes to improve forage intake from 10% to 27% in most pasture conditions by balancing essential nutrients and optimizing rumen function to maintain consistent growth paths, minimise weight loss and improve meat production, “and I believe it does” said Bernie. “The cows take what they need from the troughs that are maintained by Terry Moore, who is still my Anipro distributor today; I’m definitely happy I decided to give it a go back then and most importantly, I continue to have great results at sale time”.

Bernie has been a customer of the Norco Kyogle store since moving to the area in 2010, and is happy to say that he knows that his needs are always met.

Thanks Bernie for taking the time to tell me a bit about your life and to show me around your property. 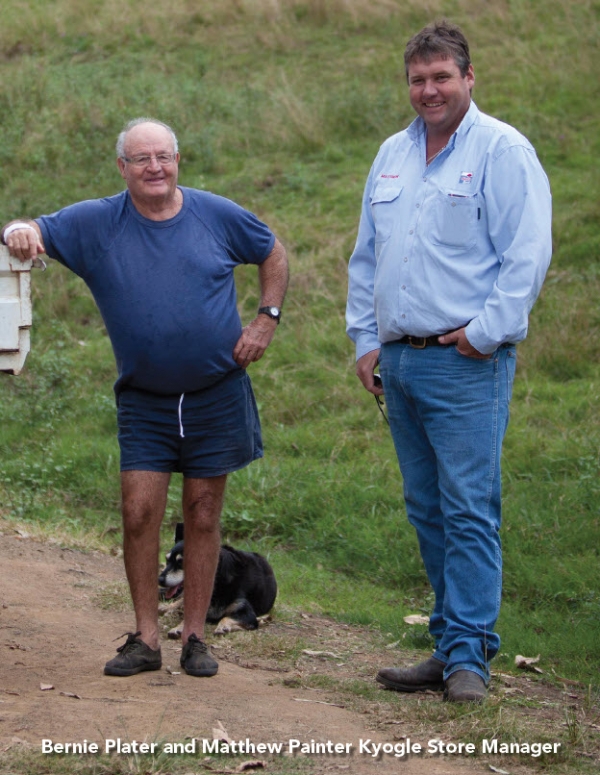