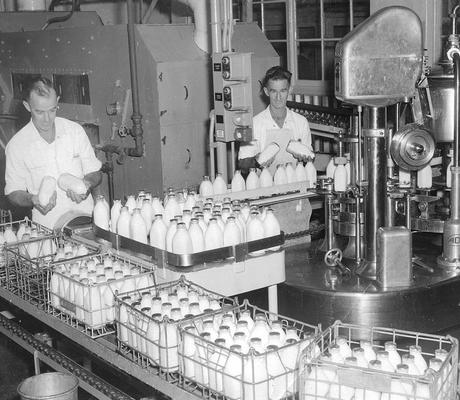 Milk was first bottled at Murwillumbah on 1st December 1950, this was followed by manufacture in Lismore following the purchase of the Peters factory in 1958.

In the 1960’s dairy farmers were encouraged to install bulk milk vats as cream deliveries were being phased out. This gave the factories much better control over quality and greater flexibility in the use of the milk.

The first bulk milk collection from dairy farms occurred in the Murwillumbah and Lismore areas in November 1969.

All milk being packed for human consumption was pasteurised by heating the milk to 72o and held for 15 seconds prior to being cooled back to less than 4oC. This was to provide milk which met all legal standards and insured an adequate shelf life to safeguard the consumer.

In the period from the commencement of packaged milk until the complete deregulation of the industry in 2001, Norco was only able to sell its packaged milk products in a restricted area between the Queensland border and Raleigh, NSW.

Access to the greater proportion of the NSW market, including Sydney, was controlled by the Milk Board and then the NSW Dairy Corporation and Norco was not able to access any of these areas because of the regulations imposed. This led to strong and persistent action by the Norco Board to break down this regulation and to seek access to the Sydney market for Norco farmers. This access gradually came by way of supplying bulk raw milk to processors in Sydney which was packaged under the processors’ own brand, thus restricting consumer knowledge of the Norco brand.

In the later stages of this process and before deregulation, Norco was providing 25% of the milk required in Sydney and North and South Coast farmers’ milk was necessary to ensure that Sydney milk met the regulatory requirement for protein in packaged milk.

The NSW government introduced a school milk program 1950 which funded the supply of 1/3 pint (157 ml) and ½ pint (236 ml) bottles of flavoured milk to all primary schools in the State. This milk was supplied in a range of flavours including strawberry, chocolate, vanilla, lime and custard. Much of this milk was delivered to schools without adequate refrigeration and in many cases by the time the students consumed the milk it was no longer cold.